Step back Ghostbusters!  Norman is here to fight off the zombies of a small town!

From Focus Features and LAIKA, the creators of the Award-Winning movie Coraline, comes the comedic thriller ParaNorman. Following Coraline, ParaNorman is the second stop-motion animated feature to be created in 3D by LAIKA. This film tells a frightfully funny, emotional and spooky story for family members of all ages.

ParaNorman takes place in the small town of Blithe Hollow where 11-year-old Norman Babcock spends most of his days studying ghosts and scary movies. Norman has the gift to see and speak with the dead, including his passed grandmother.  Norman is challenged throughout the movie to break the old witch's curse which is about to come true at any second.  Racing against time, the audience can join Norman on the hunt to stop the curse.

Pushed to his limits, Norman uses his paranormal abilities to try and become the town hero.  He is guided through his challenges by his uncle Prenderghast who reveals to him the old witch's curse.  Norman finds himself in sticky situations that will leave audience members on the edge of his or her seat. 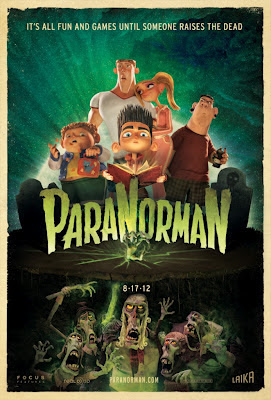 In order to win tickets to see ParaNorman on Thursday, August 16, 2012 at 7:00 p.m. at the AMC River East 21 Theater, tell us what your favorite advertisement or coupon in Family Time Magazine has been.  Have you treated your family for ice cream, pizza or attended an event listed in our magazine?  Let us know on this blog post for your chance to win a 4-pack of ParaNorman tickets!  Also, follow us on Twitter @familytimezine to help us give back to March of Dimes.  We are giving $1 for each Twitter follower we get this month.  Our goal is 1000 followers so please help us give back to a great cause and you also will be rewarded with a chance to win Raging Waves passes for your family!
Posted by Family Time Magazine at 11:32 AM