Roars, howls, and chirps of congratulations are echoing at Brookfield Zoo as 2012 marked the record for highest attendance in the zoo’s 78-year history, with 2,339,312 guests in attendance. This is an increase of 2 percent from the previous record held in 2010.
In addition, zoo membership grew to an all-time high, reaching 113,398 households (approximately 524,470 individuals) and breaking the previous membership record of 108,839 households, held in 2011. Great weather conditions also contributed to a December attendance record of 206,669, which included Holiday Magic attendance of 151,804.
“We appreciate the continued support from the community and our loyal members who enjoyed the zoo in 2012,” said Stuart Strahl, president and CEO of the Chicago Zoological Society, which manages Brookfield Zoo. “We value the opportunity to help our guests develop a personal connection with the animals in our care and inspire people to conserve wildlife and their habitats.”
New and exciting adventures are scheduled for 2013, including the April return of the popular Dinosaurs Alive! exhibit, which will feature a few old favorites like the Tyrannosaurus rex, as well as many new animatronics, including ones with feathers. Additionally, the 2013 Event Series will include the following:
* ¡Viva la Fiesta! at Brookfield Zoo is a celebration of Hispanic culture, music, food, and refreshments that will take place over the course of three weekends in May.
*  ZooBrew is a relaxed gathering in a festival setting that will feature regional musical performers and will allow guests to sample a wide variety of premium seasonal beers and microbrews, along with food pairings. ZooBrew will take place over the course of three weekends in late summer.
*  Zoo Run Run for the Conservation Fund is a 5K that takes place inside the zoo and helps raise funds to support threatened species and their environments. Zoo Run Run will be held on September 22.
*  In October, a Halloween celebration will offer tricks and treats to guests of all ages.
*  Holiday Magic, Chicagoland’s largest holiday lights festival, will return in December.
The Chicago Zoological Society inspires conservation leadership by connecting people with wildlife and nature. The Chicago Zoological Society is a private nonprofit organization that operates Brookfield Zoo on land owned by the Forest Preserve District of Cook County. The Society is known throughout the world for Brookfield Zoo's innovative, naturalistic, multispecies exhibits and for its international role in animal population management and wildlife conservation. For more information, visit www.CZS.org.
Posted by Family Time Magazine at 10:06 AM No comments:

Former Chicago Bear Dan Hampton will sign autographs as part of Silver Cross Hospital's free Men's Prostate Health Event from 6:30 to 8:30 p.m. Jan. 22 at the Lincoln-Way West Peforming Arts Center, 21701 S. Gougar Road, New Lenox. Register prior to Jan. 20 and be entered to win two Chicago Bear tickets to a 2013 game. Hampton and Dr. Thai Nguyen, Urologist and Medical Director of the Robotic Surgery Program at Silver Cross, will share important information about prostate cancer that could help save your life. Following the program, Hampton will be available for 45 minutes to sign your memorabilia and pose for photos. Please bring your own camera. There will also be a door prize drawing for a signed Dan Hampton Throwback #99 Jersey and Chicago Bears Tailgating package. And, men can also sign-up for a free prostate cancer screening held at the University of Chicago Comprehensive Cancer Center at Silver Cross Hospital. Screenings will be performed by physicians from Advanced Urology Associates. All winners must be present on Jan. 22 to receive prizes. Register by calling (888) 660-4325 or by visiting www.silvercross.org.

Posted by Family Time Magazine at 4:14 PM No comments:

Posted by Family Time Magazine at 3:36 PM No comments: 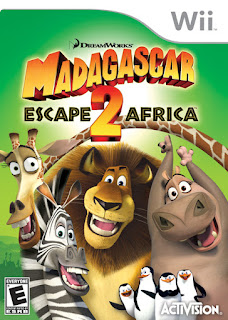 We're giving away 2 copies of the Madagascar Escape 2 Africa Wii game! Just tell us what you like best about our magazine and the new look we've introduced for 2013! Post your comments right here! Two winners will be selected at random Thursday, January 10. Good luck!

Posted by Family Time Magazine at 11:25 AM 4 comments: