Strawberry Jazz Festival in Kankakee has Something for Everyone: Take Part in the Fun this Weekend 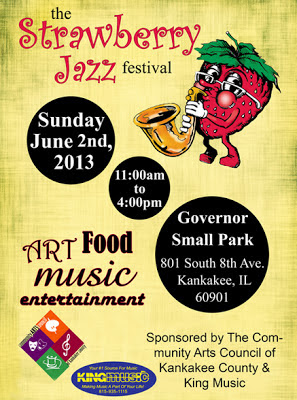 This event is sponsored by the Community Arts Council of Kankakee County and is sure to have something to please the whole family. There will be over 90 arts and crafts vendors, a large variety of food venders who will have strawberry-related creations among other food items, and entertainment through music and specialty acts all afternoon.

Some other fun excitement includes a raffle of vendor pieces, a car show featuring vintage rides, a book sale, and the Kankakee Art league's annual show. There is also so much to do for the youngsters. Exploration Station will be there with fun games and activities, of course some will be strawberry themed. Your children will have fun playing with hula hoops and balloons as well as other activities that will keep them happy and entertained.

If you are looking for a fun, family event this weekend, make sure to check out the Strawberry Jazz Festival this Sunday, June 2nd.
Posted by Family Time Magazine at 1:20 PM No comments:

THE CAT IN THE HAT will play the Broadway Playhouse at Water Tower Place (175 East Chestnut) June 15- September 1, 2013. Emerald City Theatre's production of THE CAT IN THE HAT, based on the book by Dr. Seuss and adaptation by Katie Mitchell, is the perfect friend for a boring rainy afternoon. From games and mischief to Thing One and Thing Two, The Cat brings all sorts of trouble to this grey day -- but will Sally and her brother be able to explain the mess to Mother? This Dr. Seuss classic leaps onto the stage with chaotic exuberance in this adaptation from the National Theatre in London. Best suited for ages 3-10.
The Cat in the Hat runs about 35 minutes and will be directly followed by a short, interactive session of Fun & Games with The Cat himself! See the show, and then play with the world’s most famous feline. Audiences are invited to arrive early to take part in the pre-show activity.


Don't miss out on reading an interview with Danny Taylor, The Cat, in our
June Issue of Family Time Magazine!

Posted by Family Time Magazine at 12:50 PM No comments:

LiveWire is a very talented local Chicago rock band made up of 8-10 year old kids that are dedicated to inspiring and helping other kids.

They are booked to play at the Hard Rock Chicago today, May 29th from 8pm-8:45pm. All of the proceeds and tips the band receives will be given to Lurie Children's Hospital of Chicago. 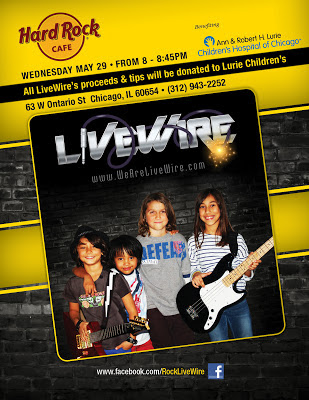 LiveWire was formed in November 2011.Their love for music brought them together and with the guidance of Ken Mandat of Hix Brothers Music they became a band. They have four members. Nikko is the lead singer and just turned 8 years old. Danny is on electric guitar and is 8 years old. Alex is on bass and just turned 10 years old.  Cohen is on drums and is 10 years old. Danny and Alex are actually brother and sister! All of the kids get along incredibly well and not only work hard together during practice but play hard together outside of music!

LiveWire wants their performances to encourage other kids to sing, pick up an instrument, paint brush, racket or anything else that interests them. They hope that people will see them and say if they can do it we can too!


Here is a clip of them playing on WGN Morning News:
http://youtu.be/ehSQPB0pDa4


When paying the $5 Cover at the Hard Rock, mention that you are there to see LiveWire and the your cover will be donated to Lurie Children's Hospital.

Posted by Family Time Magazine at 12:43 PM No comments:


Shedd Aquarium, a renowned leader in science education and immersive learning, invites guests to explore the underwater grace and wonder of stingrays in a new hands-on special exhibit, Stingray Touch.


The outdoor seasonal exhibit will allow guests to see – and feel – the texture and movement of these gentle gliding animals. Below are some fun facts regarding stingrays.

Make sure to look for the complete article about Stingray Touch in our Fun Guide, coming soon.

HOW MUCH DO YOU KNOW ABOUT STINGRAYS?
Did you know that stingrays have been around since the time of the dinosaurs? After swimming around the planet for more than 100 million years, stingrays haven’t changed much at all.

Is it a stingray or shark? The wingtip of cownose rays can curl above the water’s surface, bearing a resemblance to shark fins.

Stingrays are related to sharks, and similarly, they do not have bones. Their bodies are supported by cartilage—the same material that you feel inside the tip of your nose and ears.

Stingrays are masters of disguise. Yellow rays stay hidden on sandy ocean floors and cownose rays blend in with the blues and greys of the ocean waters.

Mr. Ray, Nemo’s stingray teacher in the animated film Finding Nemo, is a spotted eagle ray. Spotted eagle rays are found in tropical regions and can be identified by its dark dorsal surface covered in white spots or rings.

The South Carolina Stingrays are a professional minor league ice hockey team based in North Charleston, S.C. The organization's mascot is Cool Ray, loosely based on a stingray species known as the southern ray.

While a baby stingray is still inside its mother, it looks like a little adult. From birth, the young stingray is able to fend for itself.

There are more than 70 species of stingrays, including river rays that live in freshwater rivers.

The 2014 Chevrolet Corvette Stingray will serve as the Indianapolis 500 Pace Car. The Stingray model was first introduced in 1963 as part of the second generation of Corvette.

The Tampa Bay Rays are a Major League Baseball team based in St. Petersburg, Fla. Raymond, the team’s mascot, is a manta ray.


Posted by Family Time Magazine at 3:09 PM No comments:

Do You Know Someone Who Wants to Become a Babysitter? This Class Can Help!

Palos Community Hospital is offering the Red Cross Babysitter’s Training course, which is a great way for young people, ages 11 to 15, to build self-esteem and develop leadership, decision-making and communication skills.  This $55 class is fun and fast-paced with hands-on activities, role-plays, and lively discussions.


The course teaches young people how to: